Highest Accuracy in All Batching Operations
A Batch Weighing system is similar in design to a continuous Loss-In-Weight system.  Batch applications do not, however, require the material to be continuously fed with a high feed accuracy.  Batch systems are designed to maximize the precision of the final batch weight.

Controlled discharge from storage and non-pulsating feeding of materials are critical for a successful batching system.  Vibra Screw’s wide range of controlled vibration feeders and material flow aid devices permit superior accuracy in both loss-in-weight and gain-in-weight batching over a wide range of capacities.

The selection of mechanical designs for a particular material is based on our historical database and when necessary, by actual testing in our laboratories.

Batching
Batching is a form of non-continuous gravimetric closed loop control in various types of processes requiring blending of weighed ingredients. The batch system is configured very similar to the continuous LIWC system having two main configurations. The Gain-In-Weight (GIWB) and Loss-In-Weight (LIWB) batch systems. Consist of a feed devise (screw feeder, vibratory feeder or rotary feeder), Scale system, and refill system. As with the LIWC system, the batch system may be comprised of many of the feed and storage/discharge devices offered in the Vibra Screw product line.

Principles of Operation
In contrast to the continuous LIW system, the batch system uses discrete volumetric rate control instead of gravimetric rate control. The control system in a single speed batch uses a speed potentiometer to set the volumetric feeder discharge rate. This rate will not change for the entire batch.

In a two speed batch, two discrete speed settings are used during the batch. The different speeds function to first bulk feed the majority of the batch requirement and ten finish by dribbling the remaining part. The bulk speed is normally twice that of the dribble speed. The batch controller determines when the system changes from bulk to dribble speed. The weighing and refill system works the same as the LIWC system.

How Does It Work
The Gain-In-Weight Batch (GIWB) system should be used when:
A) Several ingredients are required to be batched into a weighed vessel.
B) High accuracy is required.
C) Small batch sizes will not support weighing the whole system. 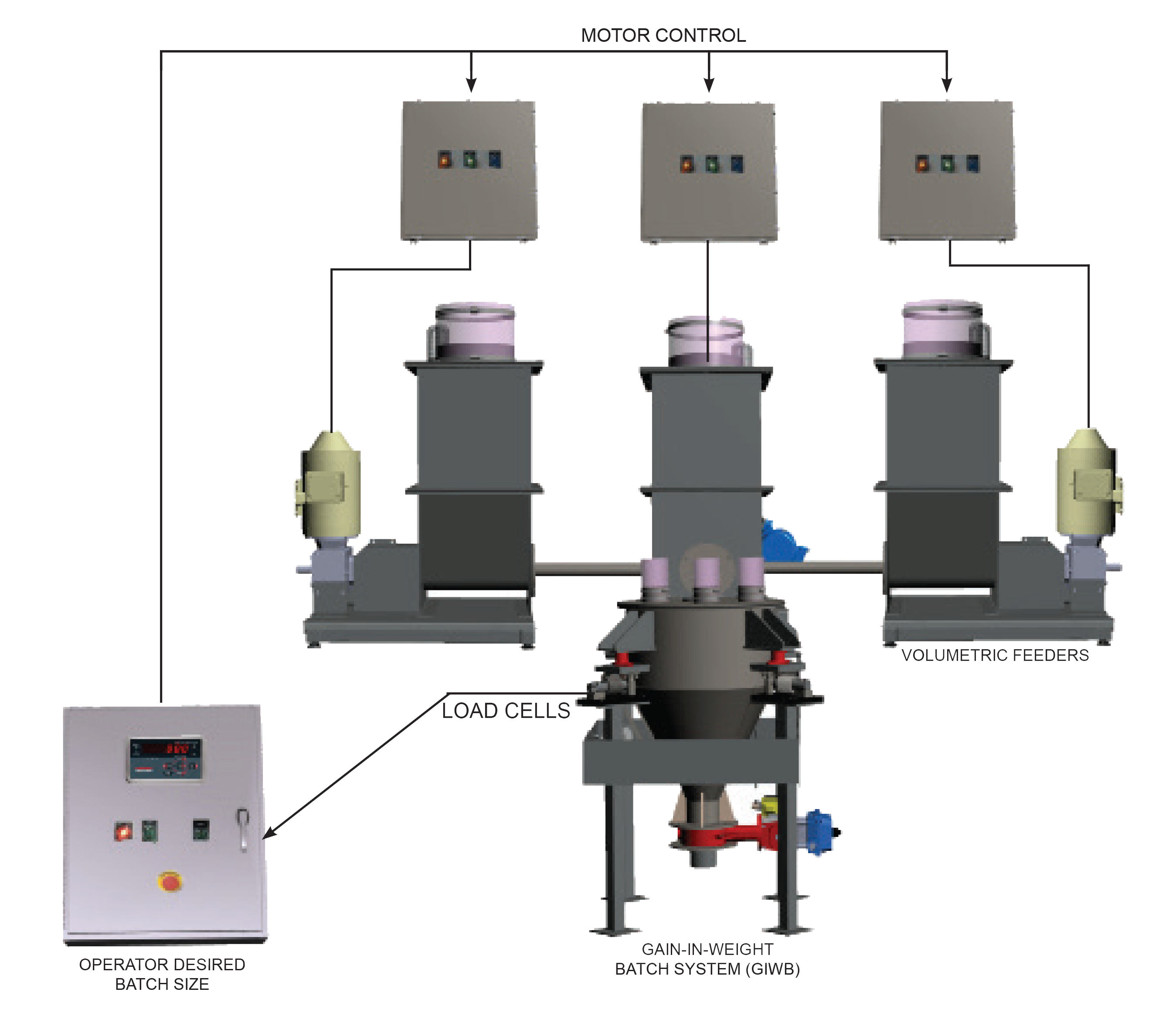 Gain-In-Weight batching system for prepared food mixes. Five dispensing bins with two speed Vibrating Tube feeders deliver ingredients to a scale-mounted semi-bulk bag (IBC) that moves from feeder to feeder on a track. Each ingredient is weighed into the IBC, and the feed is automatically cut off when the desired weight is reached 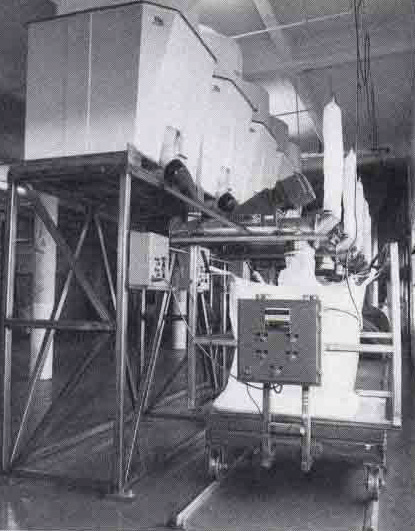 How Does It Work
The Bulk Bag Batching system is a Loss-In-Wight Batch type system with one major difference. It allows batch requirements to be grater than one bag of material. The controller uses an accumulated batch setpoint that allows for multiple tares during batch. The feeder runs until a low-level bag is detected. The feeder stops until the bag is changed and the start is pressed on the controller. This sequence continues until the desired batch amount is obtained. This configuration is normally used for large batch requirements of greater than 100 lbs.