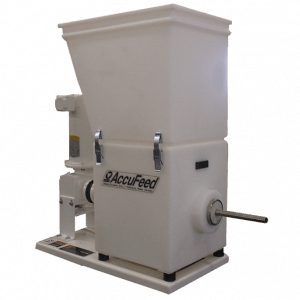 Washinton State Irrigation District Solves Copper Sulfate Dosing Problems with Vibra Screw’s AccuFeed
The State of Washington has led the U.S. in the production of apples since 1920 and currently accounts for 70 percent of our nation’s output. In addition, the state is No. 1 in the production of cherries, grapes and pears with these four fruits representing a total production value of over $3 billion. Washington owes its agricultural success to a combination of a diverse climate, rich soils and large-scale irrigation that enables farmers to produce more than 300 crops each year.
Download New Case History PDF for full article as originally appeared in Powder Bulk Solids.

AccuFeed – New Publication Available Need A Feeder? We’ll Lend You One of Ours – Free