In the summer of 1873, Fred Hatch completed his studies at Illinois Industrial University as part of the second graduating class and returned to his family farm in McHenry County Illinois. Fred had studied agricultural science under Professor William Bliss, the sole faculty member in the Agricultural Department and had come away with some new ideas to increase farm yield and efficiency.

At the time, grain at the Hatch farm was stored in a pit inside the barn where dampness and vermin took a toll. Fred Hatch persuaded his father that they needed something better, so they dug a new pit 10’ x 6’ x 8’ deep and lined it with rocks. They then built vertical sides out of two layers of old floorboards extending 16’ above the ground. And so, the first bulk silo was born.

Filled with green corn fodder, the silo minimized the effects of moisture, decay and pests which led to healthier cows and higher milk yields. The Hatches built two more silos inside the barn and the three silos remained in use until the barn was torn down in 1919. The innovation was widely copied. Bulk storage silos had arrived.

With silo building, came unique structural and functional problems not known before. What kind of force did the stored material transfer to the silo walls and bottom? In this regard, the work of German engineer H.A. Janssen in the late 1800’s was fundamental to the sound design and construction of dry bulk silos.

Equally important was the concern about even drawdown and reliable flow on demand. Dr. Andrew Jenike’s research at the University of Utah in the 1950’s was of great value in understanding and overcoming flow problems. It was now possible to design a bin for a specific material based on certain carefully measured characteristics and conditions that would be both structurally sound and predictably unloaded.

But custom silo design could not keep pace with the demand for bulk storage and few processors could afford the time and expense of a custom- built installation.

Commercial silo builders stepped up to meet the demand with a variety of standardized storage bins in assorted heights and diameters. By 1921, Columbian Steel Tank had sold over 20,000 silos worldwide. In 1939, the US Department of Agriculture announced plans to buy 30,000 silos to store a bumper crop of grain. To meet this demand, Butler Manufacturing Company shipped over 20,000 silos in 2-1/2 months.

With the widespread use of commercially built silos to store an ever growing list of dry bulk materials came the often vexing problem of unloading them. Any number of ways were developed to empty silos, from top and side extractors to screw and belt bottom dischargers.

In the typical commercial silo with a 60° conical bottom air injection and side mounted vibrators were effective with some materials. But more often than not, the standby solution was a 200lb man at the end of a 20lb sledge.

In the late 50’s and early 60’s, Eugene A. Wahl experimented with a number of vibrating devices installed both inside and on the bottom of storage silos. This led to the discovery that the most effective bin discharge device was a horizontally vibrated cone section that replaced a portion of the lower section of the bin cone itself; what for most materials is the “compaction zone” where bridging and flow stoppage occur.

This bin discharge solution or bin activator soon gained wide acceptance throughout the process industries due to its success with a great variety of dry bulk solids and its applicability to both new and existing silos of virtually any configuration. Sixty years later with hundreds of thousands of bin activators in use worldwide, this is by far the most widely applied bin discharge device on the market offered in various versions of the original design by a dozen or more manufacturers. Figure 1

With the great body of application experience gained over the years, the proper sizing and design of bin activators has become fairly, simple. The wide use of bin activators on almost every dry bulk solid gives us an empirical roadmap to their application. What may seem to be a new and vexing discharge problem to a processor has probably been solved many times over with a bin activator.

Experience has taught us that most dry materials fall into one of four basic categories of “flowability” and once we
know the category of the material we are dealing with, we can confidentially select the proper size bin activator. 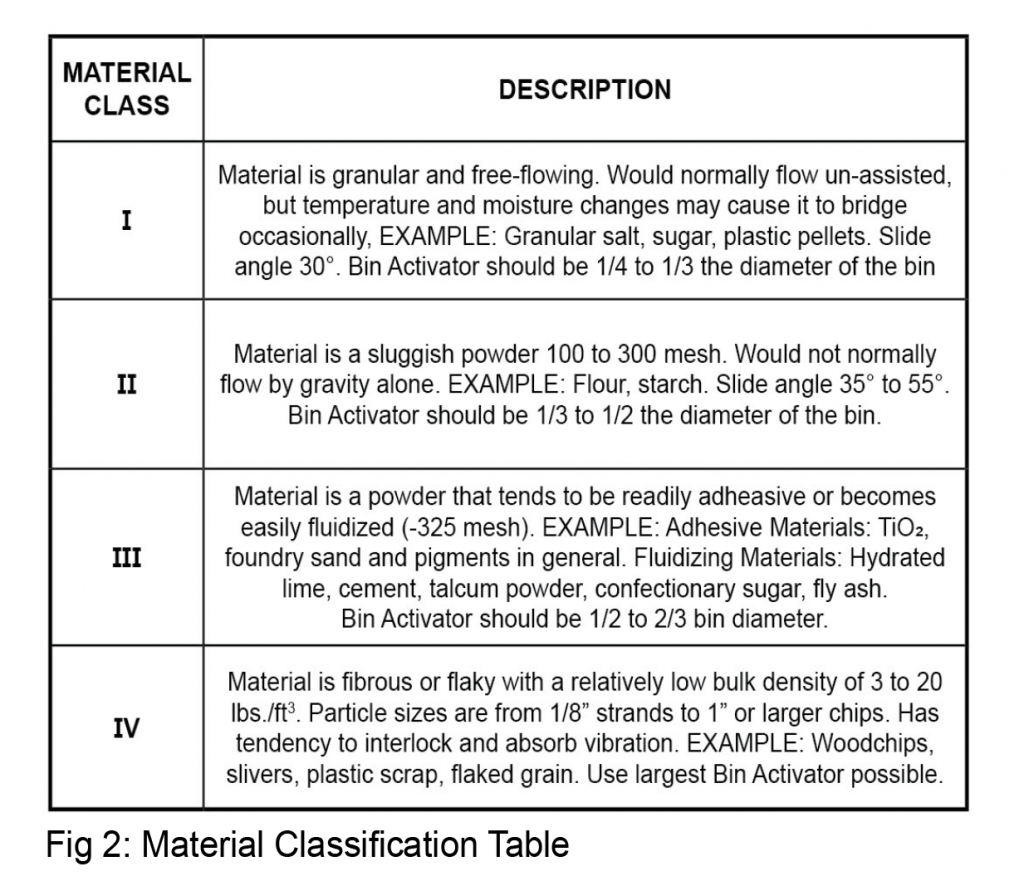 In Figure 3, we see the profile of a typical commercial silo with a 60° cone bottom. For any one of the four material classifications, there will be a compaction zone measured as a fraction of the silo diameter. This is the area of the bin cone where material will most often bridge or compact. We can expect that above the compaction zone material will not bridge. It is at this point where a bin activator is attached.

So, on a 12’ diameter silo with a 60° conical bottom where a relatively free flowing material like granular salt is stored, the compaction zone will be at the 3’ – 4’ diameter and the bin activator sized accordingly. The decision between a 3’ or 4’ size is based on things such as particle size, moisture content, throughput rates and downstream equipment.

If we store cement in the same silo, and we certainly can without changing the bin design, the compaction zone and bin activator sizing will be at 6 ’- 8’. 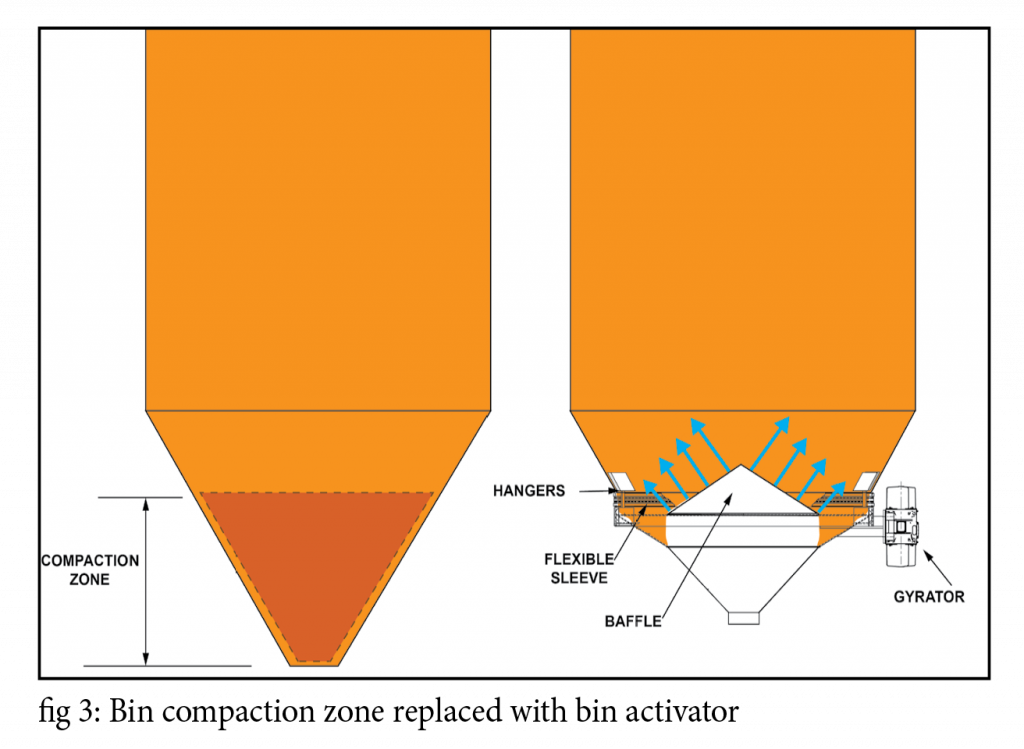 There are five critical elements in a bin activator.

First, it must be free to move in a horizontal plane while being sufficiently strong in the vertical plane to support the headload of material above. What has emerged as the preferred way of attaching a bin activator to a bin is a series
of forged steel hanger arms, “dogbones”, fitted with rubber bushings top and bottom to isolate the vibration of the bin activator from the bin itself. Depending upon the size of the bin activator and material headload there can be from 4 – 30 hanger arms each with a load rating of 80,000 – 120,000lbs. Properly designed hanger arms will isolate 95% of the Bin activator vibration from the bin above. See Figure 4.

For ease of installation on the bin, the hanger arms are often pre-assembled to a mounting ring which in turn can be bolted or welded to a matching flange on the bin cone.

The second critical element is a flexible sleeve to seal the gap between the stationary bin and the vibrating bin activator. Typically, a nylon reinforced

EPDM elastomer material is molded in one piece with clamp retaining channels top and bottom and fitted over steel clamping beads welded to the bottom edge of the silo opening and top edge of the bin activator. Stainless steel clamps top and bottom secure the sleeve insuring a leak proof installation. See Figure 5

The body of the bin activator itself can be a simple 45° cone or a compound shape with a shallow upper section and a steeper lower section. This fourth critical element converts the large diameter of the top of the compaction zone to a discharge outlet of practical size and shape. In larger bin activators 7’ diameter and above a compound slope is preferred.

The very important fifth element in bin activator design is the internal baffle. The two principal functions of the baffle are to carry some of the headload of material in the bin, keeping it off the outlet and to impart vibration to the material up above. Of significant importance is that the baffle helps create a more homogenous discharge.

Many times, when a bin is loaded, the larger particles gravitate towards the periphery of the bin with the smaller particles settling in the center. In operation the design of the internal baffle encourages flow from the bin walls while forcing the smaller particles around its edges creating a re-mixing of large and small particles. Many of the undesirable effects of funnel flow are avoided.

Apart from reliable flow on demand from virtually any silo, bin activators provide a number of process benefits. They can be designed with heating and cooling jackets to help maintain the temperature of the stored material. They can be equipped with two or more outlets to service multiple conveying lines simultaneously. They can be supplied with manifold style crossarms and baffles for the introduction of steam or other gases into the material. And they can be designed for positive and negative pressure and elevated temperatures.

Bin activators are available in a wide range of steel and surface finishes to meet any application in any industry
from AR steel in the coal industry to polished stainless steel finishes for the food and pharmaceutical industries.

Perhaps most importantly is the role bin activators play in precision feeding and reliable conveying. Neither a feeder nor a conveyor can function properly without a reliable consistent flow of material. Bin activators provide flow on demand and deliver a uniformly dense material to the conveyor or feeder below. Recently a battery of malfunctioning loss in weight feeders in service at a major tire manufacturer were brought up to spec by the installation of bin activators on the bins above. It was not the feeders that malfunctioned, just the storage bins.

Storing and discharging dry bulk solids has gone from mystifying complexity and expense to field tested commercial efficiency and economy in the last few decades. Silos, bin activators and all of the ancillary equipment needed for an efficient bulk storage installation are available from a range of manufacturers whose design assistance is based on years of practical experience in hundreds of thousands installations.